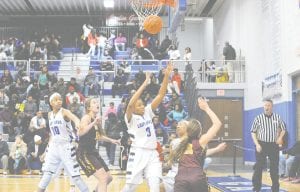 Carman-Ainsworth’s Destiny Strother waits for the ball to fall after a teammate takes the charge from Davison last Friday. Shakara Johnson (10) watches the play unfold.

Carman-Ainsworth led by one, 11-10, after the first quarter but blew up the scoreboard outscoring Davison 13-3 in the second to increase its cushion 24-13 by halftime. Davison tried to erase as much of the deficit that it could hanging close in the 17-12 third quarter that continued to favor the Lady Cavs. Carman-Ainsworth went on a second scoring burst in the fourth outscoring Davison 22-11.

Shakara Johnson led the scoring with 15 points and Destiny Strothers and Xeryia Tartt each had 14.

Tuesday’s game was a forfeit by Flint Northwestern, which canceled its girls’ season back in December.