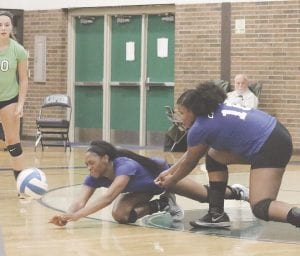 Carman-Ainsworth’s Diamond Lester, left, and Aniya Harmon dive to the floor in attempt to keep the ball alive against Lapeer on Sept. 11. Photo by Kylee Richardson

FLINT – The Carman- Ainsworth volleyball team defeated Bay City Central 25-19, 25-15, 26-24 in Monday’s Saginaw Valley League crossover match, in which the fifth-place teams from the North and South divisions square off.

Carman-Ainsworth, 14-20-5 overall and 2-4 in league play, will play in the Stoney Creek Tournament this weekend, before preparing for districts next week.