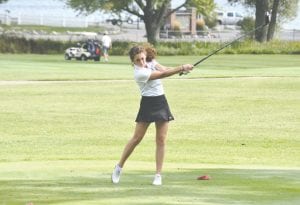 Lapeer’s Madelyn Taormina tees off during a match with Davison. Lapeer has a good chance to make the top-three of next week’s regional, but will face still competition throughout the day.

FRANKENMUTH – The Carman-Ainsworth girls’ golf team competed in the Saginaw Valley League’s championship tournament last Wednesday and finished 11th with a 541. Midland Dow was first with a 321, Flint Powers Catholic was second with a 359 and Lapeer was third with a 376.

Payton Dixon led the way for the Lady Cavs with a 115. Jamie Arnold followed with a 129, Michaela Hitchcock carded a 145 and Serenity Cooper shot a 152.

Carman-Ainsworth had a few golfers that were unable to go to the meet, as well as one other that was sick and unable to compete.

The SVL championship tournament marked the end of the season for Carman-Ainsworth, as it has opted to not compete in a regional tournament this year and will instead focus on rebuilding its program that has a bright future ahead of it.

Had Carman-Ainsworth competed, it would have been in the Region 6 tournament at Oak Pointe Country Club with host Brighton. The topthree teams and the top-three individuals not on a qualifying team from each region will move on to the state tournament.

Other teams included in Region 6 are Davison, Grand Blanc, Grand Ledge, Hartland, Holt, Howell, Lapeer and Saginaw Heritage. Brighton is the only state-ranked group in the bunch, according to the Michigan Interscholastic Golf Coaches Association, and it sits second among Division 1 teams as of this week.