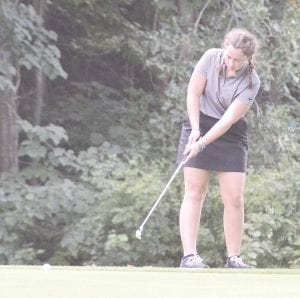 FRANKENMUTH – The Carman-Ainsworth girls’ golf team competed in the first Saginaw Valley League tournament of the season last Wednesday at the Fortress in Frankenmuth. Since the Lady Cavs only have three golfers, they were unable to post a team score.

Michaela Hitchcock led the team with a 136, while Abbi Pelky carded a 141 and Brooklyn Daly a 165. Each of the girls’ scores were improvements from last Monday’s opening match of the season, noted Carman-Ainsworth girls’ varsity coach Matt Young.

Carman-Ainsworth competed in a league match at Flushing Valley on Wednesday after we went to press and will compete at the Davison Invitational at Davison Country Club on Monday at 9 a.m. — A.V.

SOCCER: The Cavaliers were handed a 2-1 loss at Flushing last Thursday. Flushing’s Reagan Herr put the Raiders on the board on a helper from Riley Richard. Elijah Slayton found the goal unassisted for the game winner.