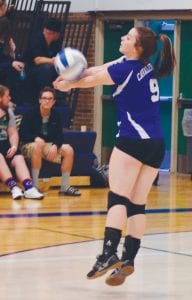 Carman-Ainsworth’s Korbin Brandon puts all her energy into a dig.

The Cavs are at the Fenton Invitational this Saturday. — B.P.