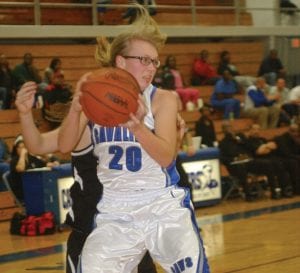 Sarah Satkowiak comes down with a rebound in a game last week against Grand Blanc.

The Lady Cavaliers had been mired in a three-game losing streak, including Monday’s 67-41 loss at Flint Northwestern. They hadn’t won since a narrow escape at Flint Beecher on Dec. 16.

But they exploded against the Lady Bearcats, jumping out to an 18-7 first-quarter lead and going up, 31- 15, at intermission. A 25-6 demolition in the third quarter made it 56- 21, and Carman triggered a running clock with an 18-8 fourth quarter.

The sorely needed win came just as the Lady Cavs are about to begin play in the Big Nine Conference, with a game Friday night at Flushing. Carman takes a 5-5 nonleague record into the game.

In Monday’s game, the Lady Cavs hung with Northwestern for a half, trailing, just 17-15, after one quarter and, 30-25, at intermission. But the Lady Wildcats erupted with a 22-10 third quarter and put it away with a 15-6 fourth period for an overall 37- 16 second-half domination.

All nine Lady Cavs scored in the game, led by Boyd with 14 points. Brandi Rimmer scored eight, Jones had seven and Hall four.