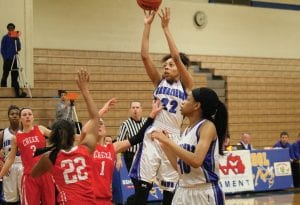 FLINT – Carman-Ainsworth buried Swartz Creek in the first quarter and cruised to a 71-41 victory in the opening game of the Class A district girls’ basketball tournament Monday night at Kearsley.

The Cavaliers shot out to a 24-4 lead in the opening eight minutes and extended it to 42-15 by halftime. It was 54-25 going into the fourth quarter.

Sydnee McDonald scored 24 points and Natalia Kincaid added 14 as Carman- Ainsworth, 13-8, advanced to Wednesday’s semifinal against Lapeer, 15-5. The winner will play in Friday’s 7 p.m. final against either Davison, 5-15, or Kearsley, 2-18.

Last Thursday, Carman-Ainsworth closed its regular season with a 55-54 win over Midland in a Saginaw Valley League crossover game at home. The Lady Cavs took a 34-19 halftime lead, then held on as Midland closed within 45-38 in the third quarter and outscored the Cavs 16-10 in the fourth.

The district champion will advance to a regional semifinal at 7 p.m. Tuesday at Flushing against the Owosso district winner.