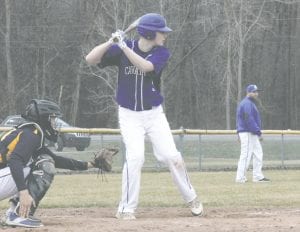 The baseball team played at New Lothrop on Tuesday. Game results were not reported by deadline.

FLINT TWP. – In a non-conference battle on Tuesday, the Carman- Ainsworth softball team was unable to get past New Lothrop in either end of the twin bill, 18-3 and 26-16. Morgan Sherrer, Makala McDaniels and Alexis Ritchie each registered hits.