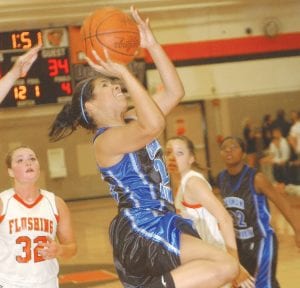 FLUSHING — Carman-Ainsworth expects to contend for the Big Nine Conference girls’ basketball championship this season, but the Lady Cavaliers got off to a slow start in their title chase last Friday.

Carman dropped an 81-69 decision at Flushing in the league opener after falling into a 26-11 deficit in the first quarter. The Lady Cavs can ill-afford another loss in Big Nine play, since the league plays only six games this year.

“Our goal is to come out on top at the end of this conference run,” said Carman coach Johnese Vaughn. “This is one game, and it’s not a 50-point loss like last year. It’s progress.”

Indeed, the Lady Cavs started this season at 4-2, exceeding the victory totals of the last two years. But a virus that affected nearly half the team contributed to a three-game losing streak before it snapped out of it with a 74- 29 romp over Bridgeport.

Vaughn said the players are healthy again, but they started slowly at Flushing, as the Lady Raiders used their height advantage to take leads of 9-0 and 18-4.

“But the next three quarters, we played our butts off. We didn’t quit, and that’s the main thing. Everybody had a great attitude and a great spirit.”

Carman trailed by 20 points in the second half, but closed strong with a 27-19 fourth quarter.