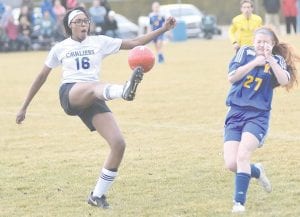 Defender Jasia Caldwell gets rid of the ball as a Kearsley opponent approaches at Carman-Ainsworth Monday.

FLINT TWP. – The Carman- Ainsworth girls’ soccer team kicked off its season on Monday against Kearsley with a 2-0 loss. The score was tied 0-0 after halftime, but Kearsley was able to net two goals early in the second half to take the win. Kearsley outshot Carman-Ainsworth 13-1.