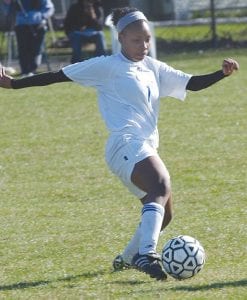 FLINT — The Carman-Ainsworth girls’ soccer team bounced back in a big way after a disappointing showing last Friday against Powers Catholic. The team traveled to Flint Northwestern on Monday and came away with a 9-0, mercy-rule victory.

All the damage was done in the first half, as the game was called at halftime due to the mercy rule. Jasmine Jones led the way with four goals and three assists, while Courtney Glinka scored two goals with three assists. Aiana Jamison, Mara Johnson and Toni Jarnigin also scored for the Lady Cavs, while Maggie McCann and Kristina Dik added assists. Savanna Lacey was in net to earn the shutout.