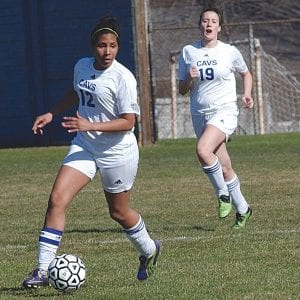 FLINT — The Carman-Ainsworth girls’ soccer team is looking to do some big things this year and last Friday was the first step in that journey. The Lady Cavs defeated former Big Nine rival, Clio, 3-1.

Sophomore midfielder Maggie McCann scored the lone first-half goal. Carman added two more goals in the second half to ensure itself of a victory.

Clio’s lone goal was scored by Haley Scribner. Savanna Lacey made seven saves in net for the Lady Cavs to earn the victory.

The Lady Cavs played Flint Kearsley last Thursday in a makeup game from March 25 and fell, 2-1, in a very close game.

The game was deadlocked for most of the second half, but Kearsley’s Kellie Murdock scored the game winner with less than seven minutes to play in the game.

Carman, 1-2-0 overall, had its game against Linden on Monday postponed due to the weather. The Lady Cavs were to play Flushing yesterday, depending on the weather. Carman will travel to Flint Powers on April 27.