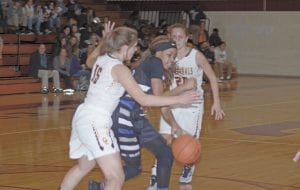 The Lady Cavs took the early 11-5 lead and never looked back outscoring the Knights 16-7 in the second. Flint outscored Carman-Ainsworth 17-16 in the third and both schools scored 10 in the fourth.

The game was tight throughtout with Carman-Ainsworth holding the slim lead 15-10 after the first quarter. The lead fell to four, 24-20 by the break. An evenly matched third quarter kept the Cavs on top 37-32 and that proved key as both sides scored 14 in the final quarter.