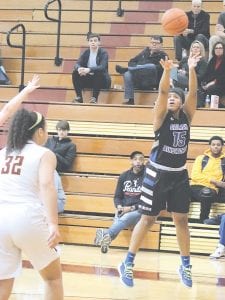 SWARTZ CREEK — The Carman- Ainsworth girls’ basketball team eliminated Flushing 48-38 in the opening round of the Div. 1 district at Swartz Creek on Monday.

Carman-Ainsworth held a 31-21 lead at halftime. Flushing began to close the gap in the second half, cutting the Cavaliers’ lead to 37-33 heading into the final frame. Flushing tied the game up early in the fourth quarter and held a brief lead before Carman-Ainsworth surged ahead to take the win.

Aaliyah McQueen led the Cavaliers with 18 points and Armoni Strozier had 16 points.

Carman-Ainsworth moved on to face Swartz Creek (13-7) on Wednesday following press deadlines. Saginaw (0-18) and Saginaw Heritage (12- 8) went head-to-head in the other semifinal. The two semifinal winners will battle for the district title at 6 p.m. at Swartz Creek on Friday.

Carman-Ainsworth went 9-0 in league play and was 16-4 overall.