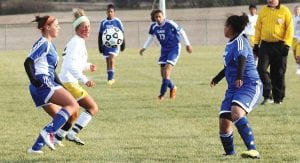 LAPEER — A cold, windy day that included snow flurries did not deter the Carman- Ainsworth girls’ soccer team as it went headto head with Lapeer East on Tuesday at Lapeer East. East edged out Carman- Ainsworth, 2-1, but the contest was a battle from start to finish.

Monica Townsend scored Carman- Ainsworth’s lone goal assisted by Jordan Marsh in the first 30 seconds of the game. Dayna McIntyre and Madison Kobylik scored for the Eagles with assists going to Alexis Whatcott and Alexis Nichols.

East coach Chad Kenny noted that both teams had equal opportunities to score and that the game was played evenly from both sides. 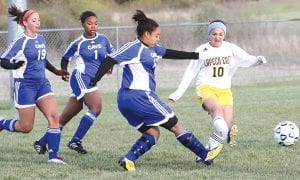 Carman-Ainsworth’s Jordan Marsh (16) got her toe on the ball against Lapeer East backed up by Monica Townsend (1) and Maggie McCann (19). 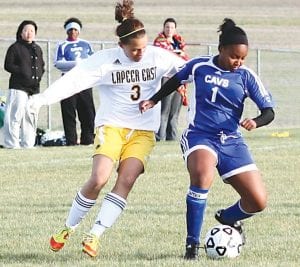 Monica Townsend would go on to score Carman-Ainsworth’s only goal of the contest.