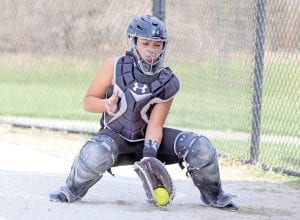 Carman-Ainsworth’s Jada Black scoops the ball up on April 19.

FLUSHING – The Carman- Ainsworth softball team began the playoffs on Tuesday but couldn’t get past Swartz Creek as the Dragons took a 10-0 win over the Cavaliers at Flushing in the pre-district game. Creek now moves on to play Kearsley in the district semifinal on Saturday with the possibility of playing in the district final at 1 p.m. against either Saginaw Heritage or Flushing. – B.P.