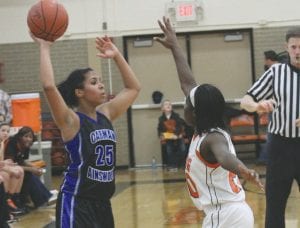 FLINT TOWNSHIP— The Lady Cavs have had some tough points thus far, but have stuck it out. The effort definitely showed on Monday as Carman-Ainsworth held on for a 42-36 win over future conference foe Flint Northern. The Cavaliers led after the first quarter, 17-10, but a strong third and fourth propelled the Lady Vikings right back into the thick of things. Carman-Ainsworth, however, would seal the deal in the final frame, where it outscored Northern, 14-4.

Jasmine Boyd’s performance was second to none, as she poured in a gamehigh 22 points, as well as seven rebounds, three steals and an assist. Jasmine Jones helped out with six points, five steals, three rebounds and one assist. Ashley Hall and Kapri Thompson each had four points, while Hall recorded two steals, two assists and five rebounds. Sarah Satkowiak had two points, two assists and snatched away five boards.

The Carman-Ainsworth girls’ basketball team also played on Friday for a Big Nine conference meeting with long time rival Flint Powers Catholic. The Cavaliers were defeated by the Chargers, 75-56, at Carman-Ainsworth on Friday.

The Lady Chargers outpaced Carman-Ainsworth throughout much of the contest, as they held a 22-14 edge at the end of the opening frame. Powers really began to surge in the second quarter, as it dropped in 21 to the Cavaliers nine. The Chargers took a seven-point edge in the third quarter, 21-14, while the Cavaliers did well in the fourth, gaining the edge, 19-11, but it wouldn’t be enough to overcome the previous onslaught from the Chargers.

As she has been several times this season, Ashley Hall sat atop the Lady Cavs’ score sheet with 10 points. Kapri Thompson tossed in eight points, while R’keshia Smith and Naryiel Purches recorded six apiece. Satkowiak and Jones each posted a five-point night, while Tomlin and Aliah Stinnett each had four. Denisha Gates and Montreca Mull scored two apiece.

Powers was led by Ally Haran with 16 points, and Sara Ruhstorfer, who recorded 15.

The Lady Cavs will be back on the hardwood on Friday when they travel to Big Nine rival Davison.