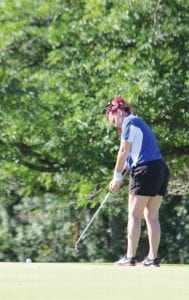 Carman-Ainsworth’s Madysen League putts during the Genesee County Meet at the Davison Country Club on Monday.

DAVISON – Just shy of the onemonth mark on the season, the Davison girls’ golf team has already won four tournaments and set two new school records. That’s a team that definitely has a target on its back, and one that Carman-Ainsworth will have to work extra hard just to catch.

In the Saginaw Valley League South Jamboree on Tuesday, Davison outpaced the field again, winning with a 173, Flint Powers was second with 190, Lapeer was third with 194, Carman-Ainsworth fourth with 219 and Flint Southwestern fifth with 281.

“These girls are all underclassmen on my squad,” said Carman- Ainsworth coach Bob Blaylock. “They aren’t golfers like some of these other teams who play all summer and during the off-season. My girls are all strong athletes and have the competitive drive, they are just more recreational golfers right now. What I would give to get them to golf all summer, but they have too many choices and distractions. I am very pleased with their efforts so far this season and I have them all back next year, so we keep working on their play.”

Mikaila Garrison led the Lady Cavs with a 44, not far off Davison’s top golfer on the day, Shelbe Cahill who was medalist. Madysen League carded a 50, Madison Cox 55 and Sloan Barkley a 70.

On Monday, Davison hosted the Genesee County Tournament and outscored the competition by 30 strokes. Davison won with 352 strokes with Grand Blanc a distant second with 382. Linden was third with 383, Fenton fired 395, Flint Powers 383, Flushing 395 competing without its top two golfers, and Swartz Creek carded 418. Goodrich, a brand new girls’ program as of last week, shot a respectable 421, with Ortonville Brandon firing a 426, Carman-Ainsworth a 475 and Clio a 477.

“It’s always nice to have homecourse advantage,” said Davison coach Darci Stocker hours after competition had ended. “We had a beautiful day, absolutely gorgeous. The girls have such high expectations they put extra pressure on themselves.”

Several of her girls have been shooting scores that can certainly get them to their goal of contending for the state title. Gabby Stephens fired a solid 82, falling two strokes shy of a medal after bogeying the final two holes. Kamryn Johnston shot 86, Shelbe Cahill 90 and Karsen Johnston 94. Maroon squad members Rachel Swanson and Claire Stoddard also fired a pair of 94s.

“Just very tough competition for us,” said Blaylock. “This Davison team is pretty good this year and will be very hard to beat.”

That’s a blistering pace for any girls’ team to keep up with.

“We are going to hang around to win the state meet,” Stocker added. “These girls set a goal early in the season that they want to win that Div. 1 state title. We are definitely on pace to see them realize that goal.”

Miss Golf candidate Alena Bowser fired a 68 to win, while Davison’s Karsen Johnston was tied for sixth at 76, Kamryn Johnston finished ninth with 77, Stephens finished with a 79 and Cahill tied for 15th with 80. Stoddard was just over 90 strokes with 92.