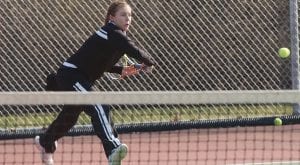 Carman-Ainsworth’s Taylor Kost looks for success at No. 4 Singles at the regional that takes place today.

SAGINAW — After earning just two points at last season’s girls’ tennis regionals, the Carman-Ainsworth squad has its hands full again this year with defending champs Midland Dow in the mix at the No. 1-8 regional along with Auburn-Bay City Western, Davison, Flint Northern, Flushing, Grand Blanc, Midland, Saginaw Heritage and Traverse City West. Regionals take place today and tomorrow at sites across the state with host sites free to choose Thursday or Friday as the official date.

To qualify for the state tournament, teams have to win their regional, place second or earn 18 points as a team. The winner and runner up at No. 1 Singles automatically qualify.

The Lady Cavaliers will rely on No. 1 Singles Afrah Aslam, No. 2 Singles Mariam Salman, No. 3 Singles Hailey Hutchins and No. 4 Singles Taylor Kost.

At doubles, the No. 1 tandem of Katie Wilson/Alexis Burnette will vie along with No. 2 Alexis Joseph/Rachel Sherwin, No. 3 Majdal Alatrash/Rachel Alexander and No. 4 Yeon Jung Park/Mishael Khan.

The girls got a good look at how the regional could go last Thursday in their Big Nine final meet of the season at Flushing, with the Raiders winning the Big Nine title after placing first ahead of Flint Powers and Davison. Carman- Ainsworth earned two points at the meet and finished the regular season at 0-5-1.

Chunn said the girls practiced outside for the first time in two weeks and the rest of the time has been spent making up matches canceled throughout the season.

“We set up a series of practices, but come Thursday, everyone is looking at the same situation with the difficult season so it hurts everyone across the board,” Chunn added. “The girls have had hardly any practices with so many makeup matches, so everyone will just have to see what unfolds Thursday.”

On Monday, the squad defeated Swartz Creek of the Flint Metro League, 7-1, losing just the No. 3 singles match.