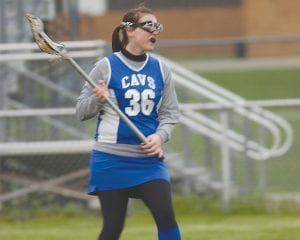 MIDLAND— The Carman-Ainsworth girls lacrosse team competed in the Mid-Michigan Women’s Lacrosse Conference tournament on Tuesday, and were knocked out in the first round with a 12-9 loss to Saginaw Heritage.

The Cavs led early, but the Hawks began firing on all cylinders. Carman- Ainsworth kept up the pace, but was not able to get past Heritage. Allia Howard and Alexus Colby were the Cavs’ leading scorers, as both recorded a hat trick. Shakira Wilson tallied twice, while Savannah Wells and Mary Lenhart got one apiece. Wells was able to win 14 of 23 draws, 10 of which she controlled herself. June Hall recovered six ground balls, and stopped 11 of 23 shots.

“Tonight was a fun contest for two young teams because girls on both teams had a chance to step up and try to make some plays… and sometimes they did,” said Carman-Ainsworth coach Tim Bausack. “I was very proud of our own girls’ effort and progress.”

The Cavs traveled to Midland last Wednesday, and were dismantled, 12- 3, by the Chemics.

Wilson, Wells, and LaDierdre McKinney each scored once for the Cavs. Midland’s Hannah Altscheffel led the game in scoring with a hat trick. The Lady Cavs won a dismal two out of the 17 draws in the game. Although they forced nine turnovers in the contest, they still surrendered 15. However, they were able to recover an astounding 29 loose balls.

“It was another situation of trial by fire for our young players going up against mostly third- and fourth-year players. Righ now, three of our four top handlers and scorers are possibly out for the rest of the season,” said Bausack. “So we’re in a situation where the young players can get a second chance after a big mistake, other players can step into new positions they haven’t played before, and everyone can challenge themselves to improve throughout the course of the game.”