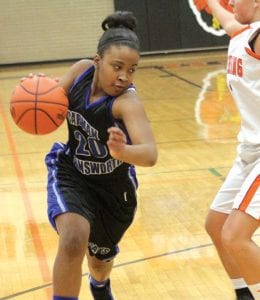 Carman-Ainsworth’s Bianca Jackson drives past a defender in a game Jan. 25.

FLINT — Carman- Ainsworth struggled to its lowest score of the season last Friday in a 65-25 girls’ basketball loss at Powers Catholic.

The Lady Cavaliers managed just four points in the first quarter and trailed, 38-10, at halftime. A 20-7 third quarter triggered a running clock, as Powers led, 58- 17, going into the fourth. Carman-Ainsworth’s two lowest scores of the season have come against the Chargers. The other game was 53-29 on Jan. 22.

Carman-Ainsworth fell to 7-10 overall and 5-5 in the Saginaw Valley League-South Division. The Lady Cavs will host first-place Davison tonight.