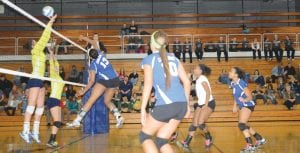 Aubrey Mikovits was selected Player of the Match after posting a 13-of-13 serve receive performance. Jessica Smith led in kills with 11, Breanna Hudson had three and Jessica McClung and Kali Jackson had two apiece. Monica Townsend had eight points and three aces, Smith had five points and one ace, Mikovits had two points and one ace and Kayla Tigner had two points and two aces, along with 17 assists. Townsend also had 18 digs, Smith had eight, McClung got under five, Jackson had four, Tigner three and Whitney Brown, Alexus Colby and Mikovits had two each. On serve receive, Townsend led with 17, Mikovits had the 13, Colby had 12, Smith got under seven and McClung, six.

The Cavs finished the season at 21-24 overall and will return all but two seniors to next year’s squad. That squad will be nine seniors strong, should everyone return to the program. 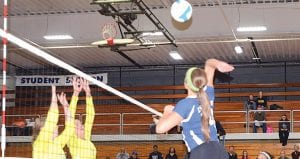 Carman-Ainsworth’s Jessica Smith goes up for the kill.