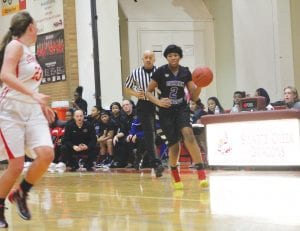 Destiny Strother, here playing at Swartz Creek in the season opener Dec. 3, led Carman-Ainsworth with 15 points against Williamston in the Motor City Roundball Classic on Dec. 30.

DETROIT – Carman-Ainsworth fought back from a 20-point halftime deficit but couldn’t come back all the way and lost to Williamston 64-47 in a Motor City Roundball Classic girls’ basketball game Dec. 30 at Detroit Edison Academy.

The Lady Cavs came out strong in the second half and cut the margin to 12 points in the first three minutes of the third quarter. But Williamston answered with four straight 3-pointers to blow the game back open.

Carman-Ainsworth kept fighting in the fourth, with Destiny Strother hitting four 3-pointers for 12 points, but the Cavs couldn’t make up the whole deficit.

The Cavs will return to Saginaw Valley League play with a home game against Saginaw on Friday.