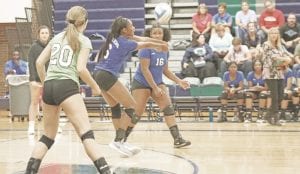 BAY CITY – The Carman-Ainsworth volleyball team was thwarted by Grand Blanc 25-9, 25-13, 25-8 at home on Tuesday. The loss moves the Lady Cavaliers to 0-2 in the Saginaw Valley League-South, while Grand Blanc improves to 2-0.

On Saturday, the Cavs lost to eventual-tournament champion North Branch 25-15, 25-7 in the gold quarterfinals at the Ann Heisler Volleyball Tournament at Bay City Western. North Branch is ranked No. 4 in Div. 2.

Lester had a team-high 30 kills along with 29 digs. Johnson added 19 kills and five blocks. Hannah Thurston led the team in digs with 36, while Dollinger again led the Lady Cavs in assists with 41.

Carman-Ainsworth is at Owosso tomorrow at 6:30 p.m.