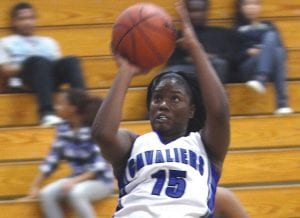 FLINT TOWNSHIP— The Lady Cavaliers have been riding an emotional high lately, after coming off of two big wins. The Cavs took down Royal Oak Shrine, 55-21, on Dec. 8 and then recorded a 73-51 drubbing of former Big Nine rival Flint Beecher on Dec. 12.

Unfortunately, a hard fought effort was not enough for the Carman-Ainsworth girls’ basketball team, as it was defeated at home on Tuesday by Hartland, 75-52, dropping the Lady Cavs’ overall record to 4-2.

Carman-Ainsworth was led by Kinterra Tomlin, who tossed in 14 points, along with five rebounds. Kapri Thompson matched Tomlin’s 14 points, while Ashley Hall chipped in with eight of her own. Jasmine Jones and Aliah Stinnett put up seven points apiece.

“ We’ve got a good mix of girls with a lot of talent,” said coach Johnese Vaughn. “I think we have a great offense that really works for us.”

Now at 4-2 overall, the Lady Cavaliers will not return to the court until Jan. 3, when they travel to take on former Big Nine rival Grand Blanc.