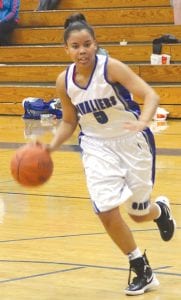 Ashley Hall looks for an opening in the lane.

DAVISON — Carman-Ainsworth ran into the toughest girls’ basketball team in the Saginaw Valley League-South Division on Tuesday night and suffered a not-too-surprising 61-33 defeat. Davison’s Cardinals improved to 5-0 in the league and have an average victory margin of 31 points in those games.

Kinterra Tomlin had 13 points and Angel Proby scored 10 for Carman-Ainsworth, but many of those points came in the Cavs’ 19-point fourth quarter. The Cavaliers mustered no more than six points in the previous three periods, falling behind, 17-4, after one period, 27-10 at halftime and 38-14 after three quarters. Aliah Stinnett and Montreca Mull scored four points each, while leading scorer Ashley Hall was held to two.

The Lady Cavs lost a non-league game at home to Grand Blanc, 57- 35, on Jan. 2. Carman-Ainsworth hung with the Bobcats for the first quarter, trailing, just 16-14. But Grand Blanc put together back-toback periods of 15-4, 15-4 over the next 16 minutes to take a 46-22 command into the fourth. Proby led the Cavs with 12 points, while Stinnett, Bianca Jackson, Tomlin and Gates each scored four.

Carman-Ainsworth, 4-5 overall and 3-2 in the Valley, will visit Midland Dow on Friday.