Lady Cavs fall to Lapeer, but rally back to beat John Glenn 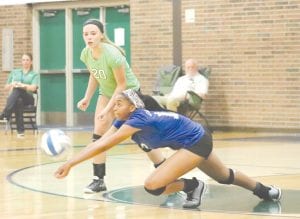 Carman-Ainsworth’s Angel Eubanks dives to the floor to keep the ball alive in Tuesday’s loss at Lapeer. Photo by Kylee Richardson

“Things are coming together for the team pretty well right now,” said Carman-Ainsworth coach Barb Hurand. “This was a great match with both teams hustling and several momentum changes in all four games. We recovered from the Game One loss by winning the next three games to win the match. We worked hard for this win, and I’m very proud of the girls.”