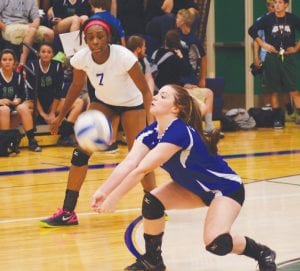 LAPEER — After a 10-day layoff, the Carman-Ainsworth volleyball team returned to action on the road on Tuesday, facing off with Saginaw Valley League-South foe Lapeer. The Lightning trumped Carman-Ainsworth in three sets, 17-25, 16-25, 20-25.

Haley Fyfe was solid on the day with 15 digs, as was Deja Lester, who added seven kills and 12 digs. Jessica Smith racked up 16 digs and Sarah Thurston had 15 assists.

The Cavaliers are back in action today at Flushing. — B.P.