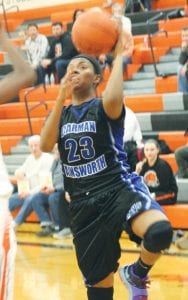 Harmany Williams and Chelsey Carpenter scored 11 points each to lead Carman-Ainsworth. Sydnee McDonald had eight points, her first single-digit total of the season and well below her 23.7 average. Natalia Kincaid scored seven points.

The Lady Cavs, 9-8, 5-4 SVL-South, had Tuesday off and will visit Davison in another league match-up on Friday.

The Carman- Ainsworth boys’ team also lost a close game at Powers last Thursday, 56-49. The Cavs fell into a 19-10 hole in the first quarter and couldn’t close the gap enough despite playing the Chargers virtually even the rest of the way. Juwan Evans scored 14 points, Josh Jackson had 10 and Jaylen Bradley scored seven to lead Carman-Ainsworth.

The Cavs, 4-11, 3-6 SVL-South, had Tuesday off and will host Davison in another league game Friday.