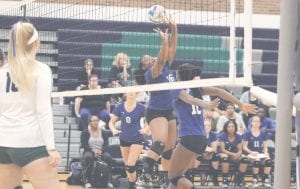 Carman-Ainsworth’s Aniya Harmon (16) sets up teammate Destiny Johnson, right, for a spike against Lapeer on Sept. 11. Photo by Kylee Richardson

“It’s disappointing to be 0-3 in the league and know that winning the league is not going to happen for us now,” said Lady Cavs coach Barb Hurand. “Some kids work hard out there for every point, while others don’t work as hard. We’re going to have to figure it out sooner than later how to get every kid to care enough to start doing their jobs in their positions. While winning the league is no longer a realistic goal for us, we have a lot of season left to make some noise. That’s what I need to get every kid to believe in right now!”