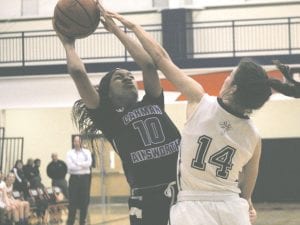 Carman-Ainsworth led by three after one quarter, 21-18 and increased the cushion to 33-22 by halftime. The game remained close with Carman- Ainsworth still on top 49-34. A 22-point showing in the fourth sealed the win as Midland could only muster eight points.

Xeriya Tartt had 16 points and Shakara Johnson had 11.