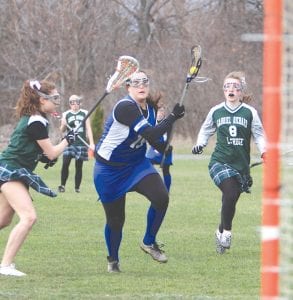 Carman-Ainsworth’s Jennifer Smith (No. 19) on a breakaway that led to a score.

FLINT TOWNSHIP — The Carman- Ainsworth girls’ lacrosse team extended its winning streak to three with a 10-7 win over Ann Arbor Gabriel Richard on Monday. The game was a rematch of the Cavs’ opening game, as well as their only loss thus far.

Jennifer Smith was the first to get on the board, giving the Cavaliers the early lead. Gabriel Richard would respond with back-to-back goals from Alex Kiers and Alicia Curmi. Both teams battled it out to a 3-3 half-time tie.

The second half was all Carman- Ainsworth. Four goals in the first 3:16 of the half bolstered the Cavs to a 7-3 lead. Gabriel Richard would cut the lead in half, but it could not stop the Cavaliers’ offense, as it went on to the 10-7 win.

Leading the way for Carman- Ainsworth was Allia Howard, who had four goals and an assist. Jennifer Smith and Eva Andrews each scored twice, while Kelsie Helton and Nicole Cramer rippled the mesh once apiece. Smith won 13-of-19 draws, six of which were controlled by Andrews.

“We had a few big defensive stops but our ability to possess the ball is ultimately what won the game for us,” said coach Tim Bausack. “They forced us into one-on-one match-ups, but our girls were very patient in the situation compared to the last time we met (Gabriel Richard).”