Lady Cavs’ golf coming into their own 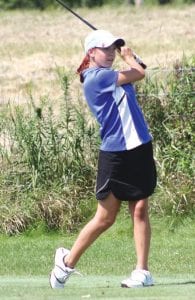 MIDLAND — The Carman-Ainsworth girls’ golf team hit the road to Currie Municipal Golf Course in Midland on Tuesday for the Saginaw Valley League-South jamboree and placed fourth with a 214. Davison won the meet with 173, Flint Powers Catholic was second with 195, Flushing carded a 207 for third and Flint Northwestern was fifth with a 348.

Meghan Borgerding scored a 48 to lead the Cavs, as did Mikaila Garrison. Alanna Gleason recorded a 57 on the day and Taylor Jarnigin added to the effort with a 61.

At the Genesee County Meet at the Clio Country Club on Friday, the Cavaliers ended the day with a 441. Borgerding led that charge with an 85 and Gleason tallied a 116. Garrison carded a 118 and Madison Cox contributed with a 122.

“I just think these sophomores have improved so much,” said coach Bob Blaylock. “They’re good athletes and they are learning how to play. They work hard and they like to play and enjoy the game and they’ll do better as the year goes on. Of course, Meghan is always solid.”

Carman-Ainsworth hosted Lapeer East following our Wednesday deadline and travels to Swartz Creek on Thursday before wrapping up the week against Fenton on Friday. — B.P.