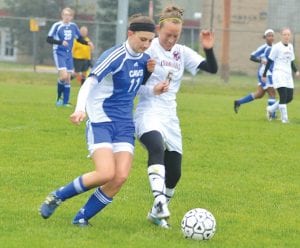 Carman-Ainsworth’s Courtney Glinka (#11) battles for the ball at Davison earlier this week.

DAVISON — A soggy, cold day did not end well for the Carman- Ainsworth girls soccer team on Monday as it took on league rival Davison at Davison under a steady rain. In the end, Davison shut out the visiting Cavaliers, 3-0. Savannah Lacey had 15 saves in net. Davison’s Alyssa Burke had two goals and Maddi Carper had one.

The Cavaliers hosted Flint Southwestern yesterday and Monday are at Flushing for another Big Nine battle.

DAVISON — Carman-Ainsworth fell to 0-4 in Big Nine Conference softball Tuesday after losing a doubleheader to Davison, 8-1 and 16-0. The games were a makeup from Monday’s rainout.

The Cavaliers had three hits in the opener, but were hurt by four errors. 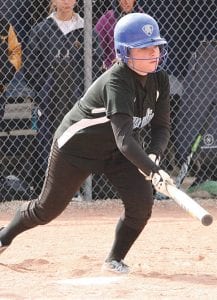 The nightcap went three innings, as Davison scored seven runs in the first inning and nine in the second. The Cavs had no hits.

Last Thursday, the Cavaliers dropped a non-league doubleheader at Metro League powerhouse Lapeer West, 9-0, and, 11-1. Carman- Ainsworth had two hits in the opener and three in the nightcap. The second game was scoreless until the fourth inning, when West erupted for seven runs.

Carman-Ainsworth, 2-14 overall, will visit Clarkston today and travels to Flushing for another Big Nine doubleheader Monday.