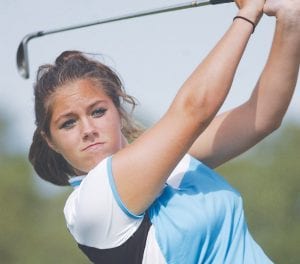 FLINT TWP.
— Golf season likely will end this week for Carman-Ainsworth as a team, but the Lady Cavs have hopes of being represented for one more week in the state tournament.

The Cavs will play in the Div. 1 regional Thursday at Prestwick Village Golf Club, where two of the 15 teams are ranked and only three will advance to the state finals Oct. 15-16 at Eagle Crest on the campus of Eastern Michigan University.

But the top three individuals not on those qualifying teams will also move on to Ypsilanti, and Meghan Borgerding has a chance to be one of them.

The freshman has turned in a solid season for her first year of varsity golf and, more importantly, has added a competitive spirit late in the season. A rough back nine in the final Big Nine tournament Sept. 27 at Flint Golf Club left Borgerding with a score of 107 and a burning desire to do better.

“I really found a lot of fire in her after that,” said Cavs coach Bob Blaylock. “She wants to be one of the best players in the league now, not just on the Carman-Ainsworth team. She was really upset with the way she played, and I’ve noticed in practice she’s been working hard and has gotten a couple of lessons. After matches, she’s off chipping and putting. I’m really encouraged by that.”

Last year’s state qualifiers from this regional shot in the high 80s to high 90s at state, and Borgerding has been in the low to mid 40s in the Cavs’ nine-hole duals.

“She has to have a very good day and play one of her better rounds, but she has a chance,” Blaylock said.

The coach is delighted with the improvement of his other three players, Danielle Sims, Selena Johnson and Tanara Crawford. Sims, a first-year player, has gotten comfortable with the game, and Johnson went from a 160 in her first 18-hole competition to a 126 in the final Big Nine tourney.

“Danielle is beginning to have fun with it,” Blaylock said. “She’s gotten more relaxed and is getting used to the competition.

“But the one that’s made the most improvement is Selena. She’s really starting to catch on. She’s hitting the ball well and has a future in the game.”