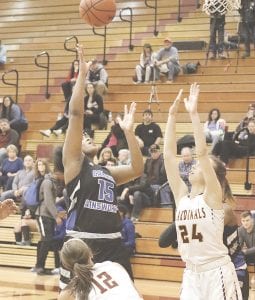 SWARTZ CREEK — The Carman-Ainsworth girls’ basketball team is entering the postseason as the heavy favorite to take home the Div. 1 district title. Along with Carman- Ainsworth, the Swartz Creek hosted district will also feature tough Flushing and Saginaw Heritage teams.

On the other end of the bracket, Saginaw Heritage (12-6) and Saginaw (0-17) will play at 7 p.m. on Wednesday. The two semifinal winners will battle it out for the district title at 6 p.m. on March 6.

Carman-Ainsworth is the only ranked team in the district, sitting at No. 6. The only losses of the season for the Cavaliers came against three other teams that are also ranked in Div. 1, including East Lansing at No. 2, Detroit Renaissance at No. 3 and Southfield Arts & Technology at No. 17, and the Div. 2 No. 1 ranked Detroit Edison.

Carman-Ainsworth started the season off hot, going undefeated for the first 11 games. The Cavaliers have only faced two of the other teams in the district, but won both match-ups, beating Flushing 38-30 back in December and beating Saginaw Heritage 58-39 in January.

The Cavaliers have a stacked roster that will see contributions from all ends. Aaliyah McQueen, who will be continuing her basketball career at the University of Illinois next year, along with Chenelle King will look continue to lead Carman- Ainsworth throughout the postseason. Carman- Ainsworth will also count on Jessiana Aaron, DeDe Smith and Chenelle King.

The Lady Cavs were handed a 73-50 loss against Detroit Edison at home on Tuesday. Aaliyah McQueen put up 21 points on the game.

On Friday, Carman- Ainsworth trounced Flint Powers 70-48 on the road. The Lady Cavs were handed just their third loss of the season last Wednesday, falling 67-59 to Detroit Renaissance.