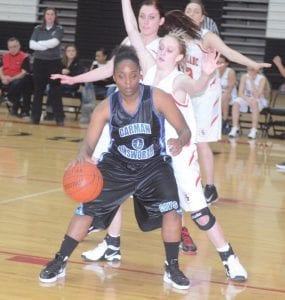 SAGINAW— The Carman-Ainsworth girls’ basketball team got a taste of the competition they will be facing next school year when the four remaining Big Nine schools will merge into the Saginaw Valley, with their last two contests against soon-to-be conference rivals.

The most recent came on Monday when the Cavaliers hosted Flint Northwestern, falling to the Wildcats, 82-55. Carman- Ainsworth remained competitive throughout the game, and really didn’t fall too far behind until the third quarter, when they were outscored, 21-8.

Jasmine Jones led the Lady Cavs with a team-high 15 points, followed by Ashley Hall who tossed in 12. Kapri Thompson recorded nine for the Cavs, while Aliah Stinnett picked up eight. Naryiel Purches dropped six points to go along with her eight rebounds.

The Lady Cavs’ got yet another preview to the Saginaw Valley when they fell to Saginaw Arthur Hill on Saturday, 84-45.

Hall was the leader for the Cavaliers, putting up a team-high 14 points. Thompson also contributed to the effort, tossing in 11 of the Lady Cavs’ points. Carman-Ainsworth will return to action on Friday when it travels to take on Big Nine rival Flushing.