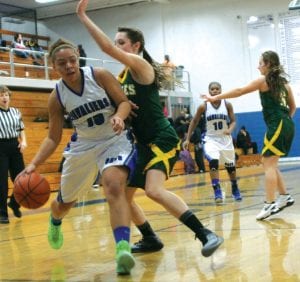 FLINT — The longest season-opening win streak in at least seven years was snapped Tuesday night when Carman- Ainsworth lost to Hamady, 64-55, in a nonleague girls’ basketball game at Hamady.

The Lady Cavaliers had put together their first 3-0 start since at least 2006, routing old nemesis Grand Blanc, 51-37, in their opener, beating Swartz Creek, 58-49, last Thursday and crushing Lapeer East, 56-27, on Monday. But, they couldn’t get past a Hamady team that has reached the Class C Final Four five times in the last eight years and won state titles in 2009 and 2010.

The game was close throughout, with Hamady taking a 12-8 first-quarter lead and Carman-Ainsworth cutting it to 28-26 by halftime. The Lady Hawks surged ahead with an 18-11 third quarter and maintained the edge through an 18-18 fourth period.

At home against East on Monday, four Cavaliers hit double figures. Proby scored 15 points, Stinnett had 13, and Richardson and Blanton scored 10 each. Proby added three rebounds and three assists, Stinnett had four assists, Blanton snared five rebounds and Nariyel Purches grabbed four. The Cavs stormed out to leads of 15- 5 after one quarter and 32-12 at halftime.

At Creek last Thursday, the Cavs rallied from a 26-25 halftime deficit to outscore the Dragons, 14-10, in the third quarter and 19-13 in the fourth. Richardson poured in 20 points and grabbed seven rebounds, while Natalia Kincaid dominated the boards with 13 rebounds. Purches added 11 points and 11 rebounds, and Proby added 10 points and five rebounds. Stinnett had six points, five rebounds and four assists.