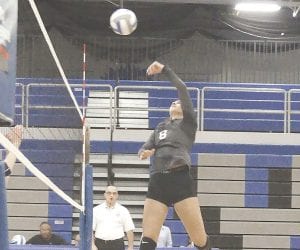 Carman-Ainsworth’s Emily Carroll spikes the ball over the net on Sept. 12. Photo by Jolette Rossi

BYRON – The Carman-Ainsworth volleyball team went 1-2 at the Byron quad on Monday. The Lady Cavs lost the first match to Byron 14-25, 19-25.

Carman-Ainsworth is at the Mt. Morris Tournament Saturday.