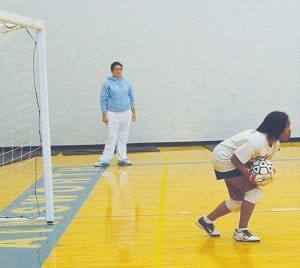 FLINT — Jessyca Mathews enters her 12th overall year of coaching while entering her fourth season at the helm of the Carman-Ainsworth girls’ soccer team.

Mathews has a majority of her team back this season, only losing two players from last year’s team that went 6-11–2 overall. Gone are Bianca Gibson and Jessica Sauders.

“This is the most excited I have been in all my years of coaching,” said Mathews. “The girls have taken the necessary steps to improve and grow as a program. The girls are committed, hard-working, and the most important aspect, determined to make a change for the better this season.”

“The girls have developed a ‘blue collar’ attitude, which means hard work will pay off,” Mathews said. “I expect improvements all the way around (including) in the girls play, in this season’s record and in the attitude about Carman-Ainsowrth girls soccer.”

“Our goal this season is simple, ‘One Goal,’ said Mathews. “We will work to be at least one goal better than our opponents and we have one goal in mind when we step out on the field and that’s to win.”