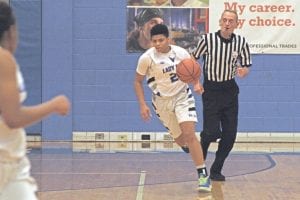 Carman-Ainsworth’s Aaliyah McQueen, shown here in Tuesday’s season opener, will return to the lineup for her senior season. Photo by Brandon Pope

FLINT TWP. – The Carman- Ainsworth girls’ basketball team is out for redemption this season after falling short in the regional opener in a 53-35 loss against Saginaw Heritage last year.

The Lady Cavaliers are coming off an 18-6 record that generated a Saginaw Valley League-Blue title and a district title, but will have to face the season without five players from that team after losing 6-foot-1 center Jasia Caldwell, as well Rayven Brantley, Destiny Strother, Myracle Palmer and Areyana Harrison to graduation.

Standout player Aaliyah McQueen, who recently committed to the University of Illinois, will return for her senior season at guard/forward. Chenelle King, guard, as well as Arie Lewis, guard/forward, and Jessiana Aaron, guard, are expected to add support for McQueen as well.

Five-year head coach Lance Belill noted that effort and attitude will be key this season and they will be their own biggest challenge.

“We are looking forward to the year and are excited to watch the girls grow,” Belill added.