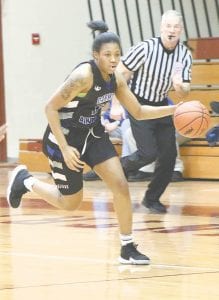 Carman-Ainsworth’s Destiny Strother heads down the court on a fast break after stealing the ball from Davison last Thursday. Strother put up 42 points in Friday’s win against Mt. Pleasant.

FLINT TWP.– The Carman- Ainsworth girls’ basketball team is heavily favored to take home the district title this season, sitting at a 16-2 record and ranked seventh in Class A. The Lady Cavs could very well face off against the reigning Class A champions Flushing in the district final, who could give Carman-Ainsworth a run for their money as the two teams have not seen each other once this season.

On the other end of the bracket, Swartz Creek, 8-10, has a first-round bye and will face the winner of Flushing, which is 14-4, and Fenton, 12-5. The two teams go head-to-head at 6 p.m. on Monday at Flushing. The winner faces Swartz Creek in the 7 p.m. semifinal at Carman-Ainsworth on Wednesday.

The final two teams left standing will vie for the district title at 7 p.m. on March 2 at Carman-Ainsworth. The winner will move on to the regional hosted by Mt. Pleasant starting on March 6.

The Carman-Ainsworth girls’ basketball team improved to 16-2 overall and 10-1 in the Saginaw Valley League with Tuesday night’s 79-62 win over Saginaw Arthur Hill.

The Lady Cavs grabbed a 26-15 lead in the opening frame and added another 27 points in the second while holding Arthur Hill to 17 to lead 53-32 at the intermission. Carman-Ainsworth then outscored Arthur Hill 15-10 in the third. Arthur Hill finally gained some momentum in the fourth quarter, outscoring Carman-Ainsworth 20-11, but it was too little, too late.

Strother helped to power Carman- Ainsworth over Mt. Pleasant on Friday after she scored 42 points on the game, which was more points that Mt. Pleasant had as a team. The Lady Cavs routed Mt. Pleasant 75-37.

Carman-Ainsworth took a 20-16 lead in the first and extended it to 38-30 by halftime. Carman-Ainsworth’s defense then began to dominate holding Mt. Pleasant to just one point in the third and six in the fourth, while the Lady Cavs added 22 and 15 points to take the win. Along with Strother’s 42, McQueen chipped in 10 points.

Carman-Ainsworth was at Flint Powers on Wednesday following press deadlines and will be at Midland on Friday to close out the regular season.