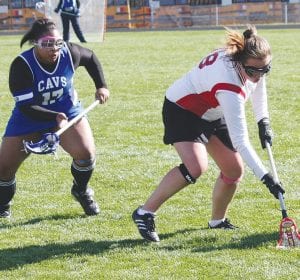 Last season, the Lady Cavaliers were captured in action against Swartz Creek.

Last year resulted in a dismal 2-12 record for the Cavs, which was mostly a result of youth and inexperience. Although they lost three key seniors in Heather Johnson, Anastasia Garty and Ariel Ingram, the returning players look to help guide a young team from the darkness of last season.

Two of the returning players, Jennifer Smith and Eva Andrews, look to be the veteran leaders. With help from newcomers Samantha Ashlock and Alexus Colby, the Cavaliers seem to be on a definite rise.

“Last year was a down year for us” said head coach Tim Bausack. “We had a lot of new players who gained plenty of experience during last season.”

Along with the lack of seasoned players last year, Carman-Ainsworth also faced difficulties with its schedule. Bausack felt that the strength of the schedule was at a level that his program was not ready for, which was also a key contributor to its .142 winning percentage.

“Our goal is to at least finish near .500.” Bausack said. “This year the strength of schedule is more around our ability.”

The Lady Cavaliers were to get their season started on March 21, but inclement weather has put the season on a delay beyond spring break. Carman-Ainsworth is set to face off against Oxford at home on Friday, April 1, weather permitting.