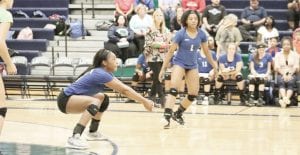 FLINT – The Carman-Ainsworth volleyball team ended its season in the district championship, losing to Flushing 25-13, 25-11, 25-20 last Friday. The game was held at Carman-Ainsworth, after originally being scheduled to take place at Saginaw Heritage. Flushing advanced to the regional semifinals, where it faced Petoskey on Tuesday after deadlines.

The Lady Cavs received a bye in the district’s opening round. Creek beat Saginaw Arthur Hill 3-1 in the opening round, while Flushing swept Heritage 3-0. Flushing also beat Kearsley 25-12, 25-10, 25-11 in the semifinal.

Carman-Ainsworth finished the season with a 16-24-5 overall record.