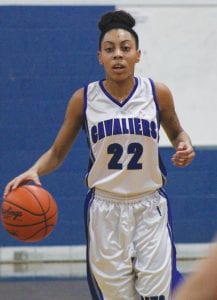 McDonald was among 10 players voted to the first team by a 10-member media panel from around the state.

McDonald transferred to Carman- Ainsworth from Hamady in her junior year and sat out the first half of that season. She made up for lost time this season with five games of 30-plus points, including 38 in the season opener against Grand Blanc.

A 5-foot-9 guard/forward who could score from anywhere, McDonald averaged 24.4 points, 8.2 rebounds, 3.2 assists, 3.4 steals and 1.5 blocks. She helped the Lady Cavaliers to a 15-9 record and was voted Most Valuable Player in the Saginaw Valley League-South Division.

McDonald has an offer from Central Michigan University and also has drawn interest from Eastern Michigan, Marquette, Illinois, Iowa, Niagara and Cleveland State.

Also on the first-team were Miss Basketball finalists Cierra Rice, a Grosse Pointe South senior who was voted the AP Class A Player of the Year, and Clarkston’s Ericka Davenport.

The Associated Press has announced its Class A girls basketball All-State team, as selected by a panel of 10 Michigan sports writers.