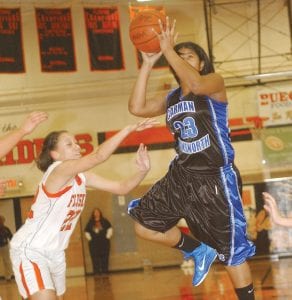 Tiara Gooch put up a jump shot in a game earlier this season.

Down 46-43, Kapri Thompson missed a 3-point attempt with three seconds left and Brandi Rimmer put back the rebound for a two-pointer that left the Lady Cavs one point short. They are 0-2 in the league with four league games remaining, and Powers is 2-0.

Jasmine Jones scored nine points and Rimmer had eight, as once again all 10 Lady Cavs scored. Thompson finished with six points and Kinterra Tomlin, Tiara Gooch and Aliah Stinnett chipped in four each.

The game was tied, 9-9, after one quarter, and Powers surged ahead, 27-23, at halftime. But Carman battled back in the third quarter, outscoring the Lady Chargers, 12-6, to take a 35-33 edge into the final eight minutes.

The Lady Cavs got back on their horse Monday and beat Flint Northern, 42-36, in a non-league game at Northern.

Jasmine Boyd poured in 22 points on 10-of-12 freethrow shooting, as Carman improved to 6-7 overall. Jones added six points, while Thompson and Ashley Hall scored four each.

The game seesawed back and forth, with Carman dominating the first and last quarters and Northern winning the middle two. The Lady Cavs went up, 17- 10, after one period, but Northern cut it to 24-21 by halftime. The Lady Vikings surged ahead, 32-28, with an 11-4 third quarter, but Carman rallied with a 14-4 fourth to pull it out.

The Lady Cavs will resume Big Nine play Friday with a home game against Davison at 6 p.m.