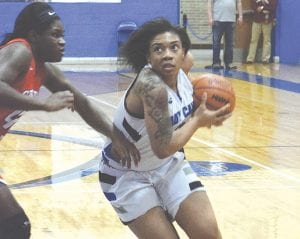 Carman-Ainsworth’s Xeryia Tartt blasts past a Swartz Creek defender as she heads to the basket during Friday’s game.

FLINT TWP. – The Carman-Ainsworth girls’ basketball team remains undefeated on the season as the Cavs defeated Grand Blanc 62-47 on Tuesday.

Carman-Ainsworth jumped out to a massive 19-4 lead in the opening quarter. Grand Blanc tried to close the gap before the half, outscoring the Cavaliers 14-8 in the second for a 27-18 lead at the break.

Xeryia Tartt set the pace for the Lady Cavs, scoring a third of Carman-Ainsworth’s points, putting up 20 on the night. Chenelle King tacked on 16 points and Jessiana Aaron added 12.

On Saturday, the Lady Cavs defeated Southfield A&T 61-41. Carman-Ainsworth barely edged out Southfield in the first to take a 10-9 lead before heating up in the second. Carman- Ainsworth held Southfield to only six points in the second while putting up 11 for a 21-14 lead at half.

The Cavaliers extended their lead to 40-33 in the third and then put the game away in the final quarter, adding 21 points to Southfield’s 17 for the 61-41 final.