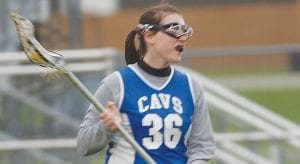 FLINT— The Carman-Ainsworth girls’ lacrosse squad entered the state regionals on Friday, as it traveled to Flint Powers Catholic to take on the Chargers. Unfortunately for the Cavaliers, they were not able to take down the mighty Chargers, as Powers advanced to the next round with a 19- 2 win.

Powers, a perennial powerhouse in Div. 2 in girls’ lacrosse, scored nine goals in the first seven minutes of the game, and never looked back. Allia Howard would get the only two goals for the Cavs in the defeat. Courtney Rousol led the way for Powers with three goals. She was one of 15 different Chargers to find the back of the net.

“I was pretty happy with how our goalie, June, did. She got a lot of action and she showed why she was chosen to be on the conference’s first team. She caused 11 changes in possession and made 10 saves.” said Carman-Ainsworth coach Tim Bausack. The Cavs also struggled on the draw, winning only three of the 23 total.

“We spent about 90 percent of the game playing defense, which was a good teaching opportunity for our girls. They need to learn to keep their head on a swivel so they can slide to help stop a drive, or pick up an open cutter, and Powers was a great team to teach them that the hard way,” said Bausack. “Hopefully the girls took good notes today and can apply what they learned to our final game next week against DeWitt, because we don’t have any practices between now and then.”