Lady Cavs pull away in fourth 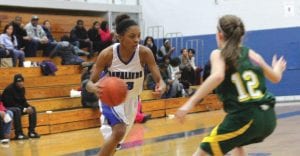 Angel Proby had 14 points for Carman-Ainsworth.

The Lady Cavaliers led 12-11 after one quarter and 27-26 at halftime. It was still a close game at 47-43 after three periods, but Carman-Ainsworth erupted for a 22-11 fourth to nail down the victory.