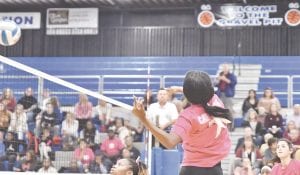 Carman-Ainsworth’s Sydney Johnson spikes the ball over the net against Davison on Oct. 15. Photo by Terry Lyons

SWARTZ CREEK – Playoffs start next week for volleyball teams across the state, and Carman-Ainsworth (3-7-1) battles Swartz Creek (2-16) in the Div. 1 district semifinals next Wednesday at 5 p.m.

On the other side of the bracket, Flushing (31-9-1) plays Kearsley (1-16) in the first round on Monday at 5 p.m. The winner advances to the semifinals against Saginaw Heritage (1-8), which will take place on Wednesday following the Swartz Creek match at 6:15 p.m.

The two remaining teams will square off in the district championship next Thursday at 5 p.m.

Neither team is currently ranked in the district, but Flushing is seen as the heavy favorite to advance.

The Lady Cavaliers are expected to advance to the district final, as Carman- Ainsworth has already beaten Swartz Creek twice this season.

All games will be played at Swartz Creek High School.